From Wikipedia, the free encyclopedia

The New England Colonies of British America included Connecticut Colony, the Colony of Rhode Island and Providence Plantations, Massachusetts Bay Colony, Plymouth Colony, and the Province of New Hampshire, as well as a few smaller short-lived colonies. The New England colonies were part of the Thirteen Colonies and eventually became five of the six states in New England.[1] Captain John Smith‘s 1616 work A Description of New England first applied the term “New England”[2] to the coastal lands from Long Island Sound to Newfoundland.[3] 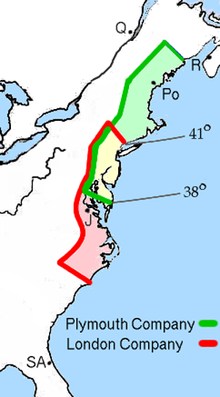 The English royal charters granted land to the north to Queen Elizabeth and land to the south to the London Company.

England, France, and the Netherlands and Canada and Alaska made several attempts to colonize New England early in the 17th century, and those nations were often in contention over lands in the New World. French nobleman Pierre Dugua Sieur de Monts established a settlement on Saint Croix Island, Maine in June 1604 under the authority of the King of France. Nearly half the settlers perished due to the harsh winter and scurvy, and the survivors moved north out of New England to Port-Royal of Nova Scotia (see symbol “R” on map to the right) in the spring of 1605.[4]

King James I of England recognized the need for a permanent settlement in New England, and he granted competing royal charters to the Plymouth Company and the London Company. The Plymouth Company ships arrived at the mouth of the Kennebec River (then called the Sagadahoc River) in August 1607 where they established a settlement named Sagadahoc Colony, better known as Popham Colony (see symbol “Po” on map to right) to honor financial backer Sir John Popham. The colonists faced a harsh winter, the loss of supplies following a storehouse fire, and mixed relations with the local Native tribes.

Colony leader Captain George Popham died, and Raleigh Gilbert decided to return to England to take up an inheritance left by an older brother—at which point, all of the colonists decided to return to England. It was around August 1608 when they left on the ship Mary and John and on a new ship built by the colony named Virginia of Sagadahoc. The 30-ton Virginia was the first sea-going ship ever built in North America.[5]

Conflict over land rights continued through the early 17th century, with the French constructing Fort Pentagouet near Castine, Maine in 1613. The fort protected a trading post and a fishing station and was the first longer-term settlement in New England. It changed hands multiple times throughout the 17th century among the English, French, and Dutch colonists.[6]

In 1614, Dutch explorer Adriaen Block traveled along the coast of Long Island Sound and then up the Connecticut River as far as Hartford, Connecticut. By 1623, the Dutch West India Company regularly traded for furs there, and they eventually fortified it for protection from the Pequot Indians and named the site “House of Hope” (also identified as “Fort Hoop,” “Good Hope,” and “Hope”).[7]

A group of Puritans known as the Pilgrims arrived on the Mayflower from England and the Netherlands to establish Plymouth Colony in Massachusetts, the second successful English colony in North America following Jamestown, Virginia. About half of the one hundred-plus passengers on the Mayflower died that first winter, mostly because of diseases contracted on the voyage followed by a harsh winter.[8] In 1621, a Native American named Squanto taught the colonists how to grow corn and where to catch eels and fish. His assistance was invaluable and helped them to survive the early years of the colonization. The Pilgrims lived on the same site where Squanto’s Patuxet tribe had established a village before they were wiped out from diseases.[9]

The Plymouth settlement faced great hardships and earned few profits, but it enjoyed a positive reputation in England and may have sown the seeds for further immigration. Edward Winslow and William Bradford published an account of their experiences called Mourt’s Relation (1622).[10] This book was only a small glimpse of the hardships and dangers encountered by the Pilgrims, but it encouraged other Puritans to immigrate during the Great Migration between 1620 and 1640. 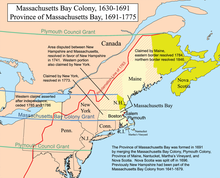 Major boundaries of Massachusetts Bay and neighboring colonial claims in the 17th and 18th centuries; modern state boundaries are partially overlaid for context

The Puritans in England first sent smaller groups in the mid-1620s to establish colonies, buildings, and food supplies, learning from the Pilgrims’ harsh experiences of winter in the Plymouth Colony. In 1623, the Plymouth Council for New England (successor to the Plymouth Company) established a small fishing village at Cape Ann under the supervision of the Dorchester Company. The first group of Puritans moved to a new town at nearby Naumkeag after the Dorchester Company dropped support, and fresh financial support was found by Rev. John White. Other settlements were started in nearby areas; however, the overall Puritan population remained small through the 1620s.[11]

A larger group of Puritans arrived in 1630, leaving England because they desired to worship in a manner that differed from the Church of England. Their views were in accord with those of the Pilgrims who arrived on the Mayflower, except that the Mayflower Pilgrims felt that they needed to separate themselves from the Church of England, whereas the later Puritans were content to remain under the umbrella of the Church. The separate colonies were governed independently of one other until 1691, when Plymouth Colony was absorbed into the Massachusetts Bay Colony to form the Province of Massachusetts Bay.

The Puritans also established the American public school system for the express purpose of ensuring that future generations would be able to read the Bible for themselves, which was a central tenet of Puritan worship.[12] However, dissenters of the Puritan laws were often banished from the Massachusetts Bay Colony. John Wheelwright left with his followers to establish a colony in New Hampshire and then went on to Maine.

It was the dead of winter in January 1636 when Roger Williams was banished from the Massachusetts Bay Colony because of theological differences. One source of contention was his view that government and religion should be separate; he also believed that the colonies should purchase land at fair prices from the Wampanoag and Narragansett tribes. Massachusetts officials intended to forcibly deport him back to England, but he escaped and walked through deep snow from Salem, Massachusetts to Raynham, Massachusetts, a distance of 55 miles. The Indian tribes helped him to survive and sold him land for a new colony which he named Providence Plantations in recognition of the intervention of Divine Providence in establishing the new colony. It was unique in its day in expressly providing for religious freedom and a separation of church from state. Other dissenters established two settlements on Rhode Island (now called Aquidneck Island) and another settlement in Warwick; these four settlements eventually united to form the Colony of Rhode Island and Providence Plantations.[13] 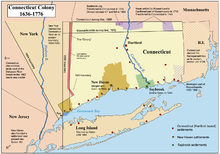 Map of the Connecticut, New Haven, and Saybrook colonies

Thomas Hooker left Massachusetts in 1636 with 100 followers and founded a settlement just north of the Dutch Fort Hoop which grew into Connecticut Colony. The community was first named Newtown then renamed Hartford to honor the English town of Hertford. One of the reasons why Hooker left Massachusetts Bay was that only members of the church could vote and participate in the government, which he believed should include any adult male owning property. He obtained a royal charter and established Fundamental Orders, considered to be one of the first constitutions in America. Other colonies later merged into the royal charter for the Connecticut Colony, including New Haven and Saybrook Colony.

The earliest colonies in New England were usually fishing villages or farming communities on the more fertile land along the rivers. The rocky soil in the New England Colonies was not as fertile as the Middle or Southern Colonies, but the land provided rich resources, including lumber that was valued for. Lumber was also a resource that could be exported back to England, where there was a shortage of wood. In addition, the hunting of wildlife provided furs to be traded and food for the table.

The New England Colonies were located along the Atlantic coast where there was an abundance of marketable sea life. Excellent harbors and some inland waterways offered protection for ships and were also valuable for fresh water fishing. By the end of the 17th century, New England colonists had created an Atlantic trade network that connected them to the English homeland as well as to the West African slave coast, the Caribbean’s plantation islands, and the Iberian Peninsula. Colonists relied upon British and European imports for glass, linens, hardware, machinery, and other items for the household.

The Southern Colonies could produce tobacco, rice, and indigo in exchange for imports, whereas New England’s colonies could not offer much to England beyond fish, furs, and lumber. Inflation was a major issue in the economy. During the 18th century, shipbuilding drew upon the abundant lumber and revived the economy, often under the direction of the British Crown.[14]

“The Hull Mint produced several denominations of silver coinage, including the pine tree shilling, for over 30 years until the political and economic situation made operating the mint no longer practical.” Charles II of England deemed the “Hull Mint” high treason in the United Kingdom which had a punishment of Hanging, drawing and quartering. “On April 6, 1681, Randolph petitioned the king, informing him the colony was still pressing their own coins which he saw as high treason and believed it was enough to void the charter. He asked that a writ of Quo warranto (a legal action requiring the defendant to show what authority they have for exercising some right, power, or franchise they claim to hold) be issued against Massachusetts for the violations.”[15]

Enslavement of enemies defeated in war was a common practice in European nations at this time. This was a policy that had been going on for decades in Ireland, particularly since the time of Elizabeth I and during the mid-17th century Cromwell wars in Britain and Ireland, where large numbers of Irish, Welsh, and Scots prisoners of war were sent as slaves to plantations in the West Indies, especially to Barbados and Jamaica.[16] The practice found its way to the American colonies during the Pequot War and King Philip’s War.

Military leader Benjamin Church spoke out against enslaving Indians in the summer of 1675, describing the practice as “an action so hateful… that (I) opposed it to the loss of the good will and respect of some that before were (my) good friends.” This said, Church was an owner of African slaves himself, like many Englishmen in the colony.[17] Ships carrying captured war combatants began to leave New England ports during King Philip’s War (1675–78) and continued for the three years of the war. The policy concerning war enemies was that “no male captive above the age of fourteen years should reside in the colony.”[18] It is estimated that at least a thousand New England Indian warriors were sold as slaves during King Philip’s War, with over half of those coming from Plymouth.[19]

In the New England Colonies, the first settlements of Pilgrims and the other Puritans who came later taught their children how to read and write in order that they might read and study the Bible for themselves. Depending upon social and financial status, education was taught by the parents home-schooling their children, public grammar schools, and private governesses, which included subjects from reading and writing to Latin and Greek and more.