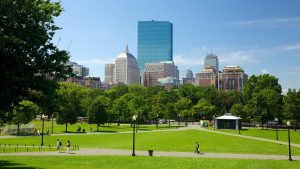 Hear the echoes of 350 years of the most extraordinary history of America’s oldest park.

Here the Colonial militia mustered for the Revolution. In 1768, the hated British Redcoats began an eight-year encampment. George Washington, John Adams and General Lafayette came here to celebrate our nation’s independence. The 1860s saw Civil War recruitment and anti-slavery meetings. During World War I, victory gardens sprouted. For World War II, the Common gave most of its iron fencing away for scrape metal.

Frederick Law Olmsted never touched Boston Common, but his sons did. About 1913, their firm supervised the paving of walkways, the replenishment of the soil, and the moving of 15-ton trees.

From a utilitarian common ground for activities like grazing, militia formations and public hangings, the Common evolved. Its peaks were leveled cows were banned and 19th Century Bostonians added trees, fountains and statuary. The Common became the park-like greenspace we know today. The park includes ballfields, a tot lot and the Frog Pond, which provides skating in winter and a spray pool for children in the summer.

The Friends of the Public Garden is a non-profit citizen’s advocacy group formed in 1970 to preserve and enhance the Boston Public Garden, Common, and Commonwealth Avenue Mall in collaboration with the Mayor and the Parks & Recreation Department. The Friends number over 2,500 members and many volunteers. The Friends have also produced a brochure detailing the park’s history.

The Boston Common Visitor Center is a good place to start the Freedom Trail. The trail starts right outside. The visitor center has lots of area brochures and maps. Maps for the Freedom Trail are not free. Helpful guides are available to help plan your route or answer questions.
There is a public restroom here.