to become the first American in space (formerly on display at the U.S. Naval Academy, now displayed at the Kennedy Library)

The library’s first floor features a museum containing video monitors, family photographs, political memorabilia. Visitors to the museum begin their visit by watching a film narrated by President Kennedy in one of two cinemas that show an orientation film, and a third shows a documentary on the Cuban Missile Crisis.

There are seven permanent exhibits:[30]

The sailboat Victura and the exterior of the Library

Kennedy’s 25-foot Wianno Senior sailboat Victura is on display on the grounds of the Library from May to October. Acquired by the family when Kennedy was 15, it played an important role in forging sibling bonds and, after the president’s death, continued being sailed by other members of the family, especially race-enthusiast brother Ted.[45][46]

The Library has a variety of temporary and special exhibits.[47] 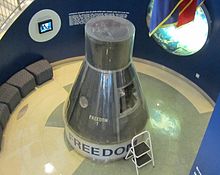