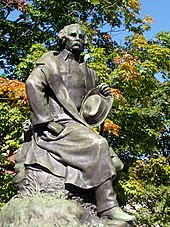 Scene along the Salem waterfront, circa 1770–80

Salem is located at the mouth of the Naumkeag River at the former site of an Native American village and trading center. Colonists settled the area in 1626 when a company of fishermen[13] arrived from Cape Ann led by Roger Conant. Conant’s leadership provided the stability to survive the first two years, but John Endecott replaced him by order of the Massachusetts Bay Company. Conant graciously stepped aside and was granted 200 acres (0.81 km2) of land in compensation. These “New Planters” and the “Old Planters”[13][14] agreed to cooperate, in large part due to the diplomacy of Conant and Endecott. In recognition of this peaceful transition to the new government, the name of the settlement was changed to Salem, a hellenized form of the Hebrew word for “peace” (שלום, shalom).[15][16]

In 1628, Endecott ordered that the Great House be moved from Cape Ann, reassembling it on Washington Street north of Church Street.[17] Francis Higginson wrote that “we found a faire house newly built for the Governor” which was remarkable for being two stories high.[18] A year later, the Massachusetts Bay Charter was issued creating the Massachusetts Bay Colony with Matthew Craddock as its governor in London and Endecott as its governor in the colony.[19] John Winthrop was elected Governor in late 1629, and arrived with the Winthrop Fleet in 1630, one of the many events that began the Puritan Great Migration.[20]

In 1639, Endecott was one of the signers on the building contract for enlarging the meeting house in Town House Square for the first church in Salem. This document remains part of the town records at City Hall. He was active in the affairs of the town throughout his life. Samuel Skelton was the first pastor of the First Church of Salem, which is the original Puritan church in America.[21][22] Endecott already had a close relationship with Skelton, having been converted by him, and Endecott considered him as his spiritual father.[23][24] 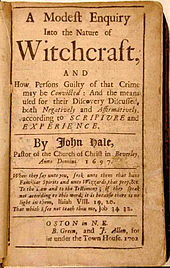 Title page of A Modest Enquiry Into the Nature of Witchcraft by John Hale (Boston, 1702)

One of the most widely known aspects of Salem is its history of witchcraft allegations which started with Abigail Williams, Betty Parris, and their friends playing with a Venus glass (mirror) and egg. The infamous Salem witch trials began in 1692, and 19 people were executed by hanging as a result of the false accusations; Giles Corey was pressed to death for refusing to plead innocent or guilty, thus avoiding the noose and instead dying an innocent man.[26] Salem is also significant in legal history as the site of the Dorothy Talbye Trial, where a mentally ill woman was hanged for murdering her daughter because Massachusetts made no distinction at the time between insanity and criminal behavior.[27]

William Hathorne was a prosperous businessman in early Salem and became one of its leading citizens. He led troops to victory in King Philip’s War, served as a magistrate on the highest court, and was chosen as the first speaker of the House of Deputies. He was a zealous advocate of the personal rights of freemen against royal emissaries and agents.[28][29] His son Judge John Hathorne came to prominence in the late 17th century when witchcraft was a serious felony. Judge Hathorne is the best known of the witch trial judges, and he became known as the “Hanging Judge” for sentencing accused witches to death.[30][31]

On February 26, 1775, patriots raised the drawbridge at the North River on North Street, preventing British Colonel Alexander Leslie and his 300 troops of the 64th Regiment of Foot from seizing stores and ammunition hidden in North Salem. Both parties came to an agreement and no blood was shed that day, but war broke out at Lexington and Concord soon after. A group of prominent merchants with ties to Salem published a statement retracting what some interpreted as Loyalist leanings and professing their dedication to the American cause, including Francis Cabot,[32] William Pynchon, Thomas Barnard, E. A. Holyoke, and William Pickman.[33]

During the American Revolutionary War, the town became a center for privateering. The documentation is incomplete, but about 1,700 Letters of Marque were granted during that time, issued on a per-voyage basis. Nearly 800 vessels were commissioned as privateers and are credited with capturing or destroying about 600 British ships.[34] Privateering resumed during the War of 1812.

Trade with the Pacific and Africa

Following the American Revolution, many ships used as privateers were too large for short voyages in the coasting trade,[35] and their owners determined to open new avenues of trade to distant countries. The young men of the town, fresh from service on the armed ships of Salem, were eager to embark in such ventures. Captain Nathaniel Silsbee, his first mate Charles Derby, and second mate Richard J. Cleveland were not yet twenty years old when they set sail on a nineteen-month voyage that was perhaps the first from the newly independent America to the East Indies. In 1795, Captain Jonathan Carnes set sail for Sumatra in the Malay Archipelago on his secret voyage for pepper; nothing was heard from him until eighteen months later, when he entered with a cargo of pepper in bulk, the first to be so imported into the country, and which sold at the extraordinary profit of seven hundred per cent.[36] The Empress of China, formerly a privateer, was refitted as the first American ship to sail from New York to China. By 1790, Salem had become the sixth largest city in the country, and a world-famous seaport—particularly in the China Trade, along with exporting codfish to Europe and the West Indies, importing sugar and molasses from the West Indies, tea from China, and products depicted on the city seal from the East Indies – in particular Sumatran pepper. Salem ships also visited Africa – Zanzibar in particular, Russia, Japan, and Australia.

The neutrality of the United States was tested during the Napoleonic Wars. After the Chesapeake–Leopard affair, President Thomas Jefferson was faced with a decision to make regarding the situation at hand. In the end, he chose an economic option: the Embargo Act of 1807. Jefferson essentially closed all the ports overnight, putting a damper on the seaport town of Salem. The embargo of 1807 was the starting point on the path to the War of 1812 with Great Britain. Both Great Britain and France imposed trade restrictions in order to weaken each other’s economies. This also had the effect of disrupting American trade and testing the United States’ neutrality. As time went on, harassment of American ships by the British Navy increased. This included impressment and seizures of American men and goods.[39]

The Salem–India Story by Vanita Shastri narrates the adventures of the Salem seamen who connected the far corners of the globe through trade. This period (1788–1845) marks the beginning of U.S. international relations, long before the 21st century wave of globalization. It reveals the global trade connections that Salem had established with faraway lands, which were a source of livelihood and prosperity for many. Charles Endicott, master of Salem merchantman Friendship, returned in 1831 to report Sumatran natives had plundered his ship, murdering the first officer and two crewmen. Following public outcry, President Andrew Jackson ordered the Potomac on the First Sumatran Expedition, which departed New York City on August 19, 1831. This also led to the mission of diplomatist Edmund Roberts, who negotiated a treaty with Said bin Sultan, Sultan of Muscat and Oman on September 21, 1833.[40] In 1837, the sultan moved his main place of residence to Zanzibar and welcomed Salem citizen Richard Waters as a United States consul of the early years.[39]

Legacy of the East Indies and Old China Trade

The Old China Trade left a significant mark in two historic districts, Chestnut Street District, part of the Samuel McIntire Historic District containing 407 buildings, and the Salem Maritime National Historic Site, consisting of 12 historic structures and about 9 acres (36,000 m2) of land along the waterfront in Salem. Elias Hasket Derby was among the wealthiest and most celebrated of post-Revolutionary merchants in Salem. Derby was also the owner of the Grand Turk, the first New England vessel to trade directly with China and second to sail from the United States after the Empress of China. Thomas H. Perkins was his supercargo and established strong ties with the Chinese and garnered the Forbes fortune through his illegal opium sales.

Salem was incorporated as a city on March 23, 1836,[41] and adopted a city seal in 1839 with the motto “Divitis Indiae usque ad ultimum sinum“, Latin for “To the rich East Indies until the last lap.” Nathaniel Hawthorne was overseer of Salem’s port from 1846 until 1849. He worked in the U.S. Customs House across the street from the port[42] near Pickering Wharf, his setting for the beginning of The Scarlet Letter. In 1858, an amusement park was established at Juniper Point, a peninsula jutting into the harbor. Prosperity left the city with a wealth of fine architecture, including Federal-style mansions designed by one of America’s first architects, Samuel McIntire, for whom the city’s largest historic district is named. These homes and mansions now comprise the greatest concentrations of notable pre-1900 domestic structures in the United States.

Shipping declined throughout the 19th century. Salem and its silting harbor were increasingly eclipsed by nearby Boston and New York City. Consequently, the city turned to manufacturing. Industries included tanneries, shoe factories, and the Naumkeag Steam Cotton Company. More than 400 homes were destroyed in the Great Salem Fire of 1914, leaving 3,500 families homeless from a blaze that began in the Korn Leather Factory at 57 Boston Street. The historic concentration of Federal architecture on Chestnut Street were spared from destruction by fire, in which they still exist to this day. A memorial plaque currently exists where the Korn Leather Factory once stood, on what is now a Walgreens store 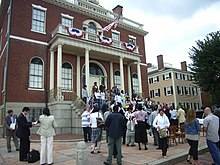 Photos from one of our many trips to Salem, Ma